CD Projekt Red has apologized for the plaguing issues faced by gamers of Cyberpunk 2077 playing on consoles, while highlighting the 2021 redressal measures underway

CD Projekt Red (CDPR) co-founder Marcin Iwiński has issued a public apology for the current predicament of Cyberpunk 2077 on consoles via a video, in which he also showcased a sketchy roadmap of how the game stands to be updated throughout this year.

In an elaborate thought outflow, Iwiński shared his perspective, how the game came to launch with so many bugs on PlayStation 4 and Xbox One that it was often unplayable. One week after the game’s release date, Sony pulled it from the PlayStation Store entirely and offered a refund to anyone who wanted one. Microsoft also offered refunds to aggrieved Xbox players, and CDPR is facing legal action over claims that it misled investors and players. 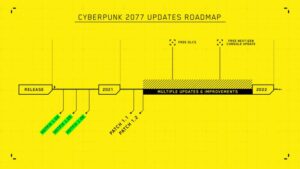 Lack of compatibility across platforms

In the video, Iwiński fundamentally stated that his team was a tad too optimistic regarding the PC edition of the game, which served as the foundation for the console version and proved to be too taxing for eighth-generation hardware. The in-game streaming system appeared to be a constant trouble-maker for the console team. This resulted in developers omitting a wide array of glitches while testing its various versions, Iwiński mentioned.

The main issue with the console versions seemed to be the limited storage bandwidth on offer, which struggles with streaming-in assets. The developer said that during their testing, they didn’t face many of the issues that the users did and that they were confident they would sort things out in the day zero update.

You May Also Like :  Top 10 E-Sports Games to Play This Month

“The console version of Cyberpunk 2077 did not meet the quality standard we wanted it to meet,” Iwiński said. “I and the entire leadership team are deeply sorry for this, and this video is me publicly owning up to that. Please don’t fault any of our teams for what happened,” was Iwiński’s concluding remark and request.

Some cheer for Cyberpunk lovers

To bring some cheer to Cyberpunk 2077 customers and fans alike, CDPR laid out a written version of Iwiński’s statements as a series of FAQs, and also shared that the game’s free next-gen console upgrade will land in the second half of 2021.

CDPR will be releasing several updates over the course of the year, which aims to fix the bugs in the game. The first major v1.1 patch will be released in the upcoming 10 days and then an even bigger v1.2 patch will come out a few weeks later. There should also be some unspecified hotfixes similar to what players have received so far.

As the year progresses, the company will also be releasing free DLCs for the game, along with the native Xbox Series X|S and the PlayStation 5 versions. CDPR has also confirmed that its team is diligently working on reducing developer crunch time, with the aim of bringing the game back on the PlayStation Store, and their first wave of refunds have been already sent out, reaffirming its commitment.