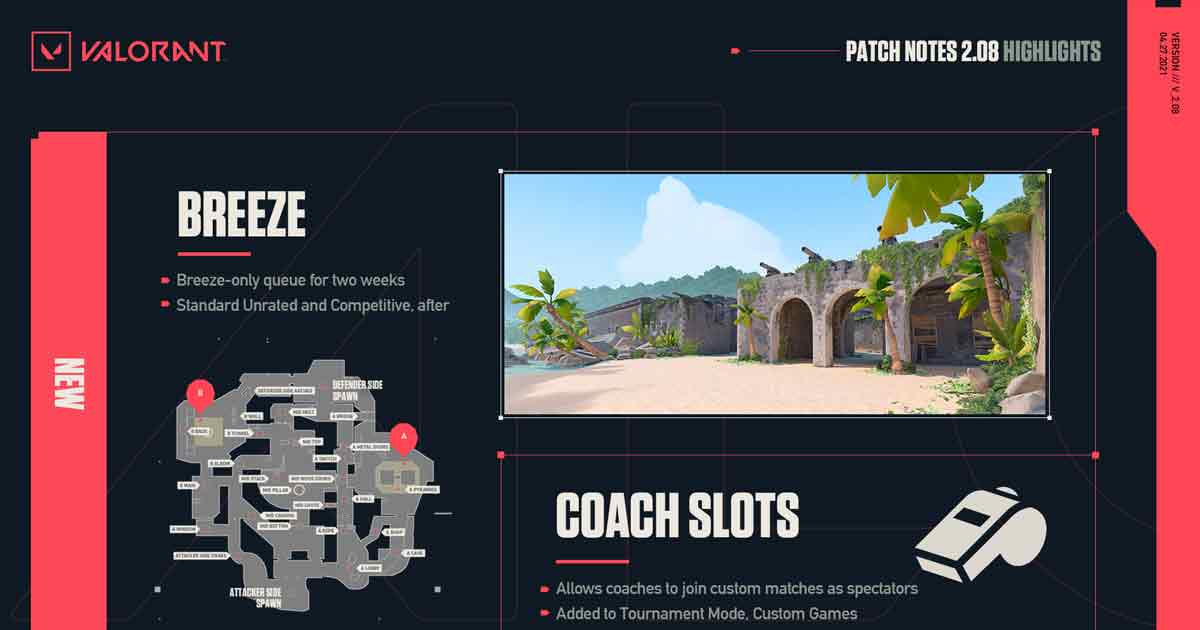 Valorant has received its latest patch 2.08 update and it brings the new map Breeze, along with critical bug fixes for Astra and Viper

The latest 2.08 patch update for Valorant is now live and it adds a new map, along with bug fixes for famous champions. Valorant patch 2.08 marks the launch of Episode 2 Act 3.

The major update of patch 2.08 is the release of new map Breeze. Fans of Valorant would be happy to find several bug fixes to their favourite champions Astra and Viper.

There are not many balance changes this time around, though. They will be coming with Episode 3 in June this year.

Valorant Episode 2 Act 3 is launching with patch 2.08 and there is plenty of new content set to hit Future Earth. Of course, there is an all-new battle pass, with rewards waiting for gamers.

Valorant fans have been looking forward to the new map, Breeze, for quite a while now. Its addition is expected to add more depth to the map pool. Also, it is one of the relatively expansive battlegrounds in Valorant till date.

The new map features lots of long sightlines. Players get ample space to spread their team out on attack and defence to try and conquer the beach paradise.

Riot is giving players a new, temporary playlist. It will be a Breeze-only Unrated queue for two weeks for them to learn the map. After that, it’ll be enabled in Unrated and Ranked play, as well as for VCT Stage 2 Masters in May.

Patch 2.08 will be introducing the newest Valorant Act of Episode 2. Act 3 that has already hit the floor yesterday and is the last major update of this arc of Valorant’s history ahead of Episode 3.

The new battle pass is launching with 50 tiers of rewards to grind towards. The Forsaken skin line – the dark side of the prestigious Sovereign one – is also being added to the shop.