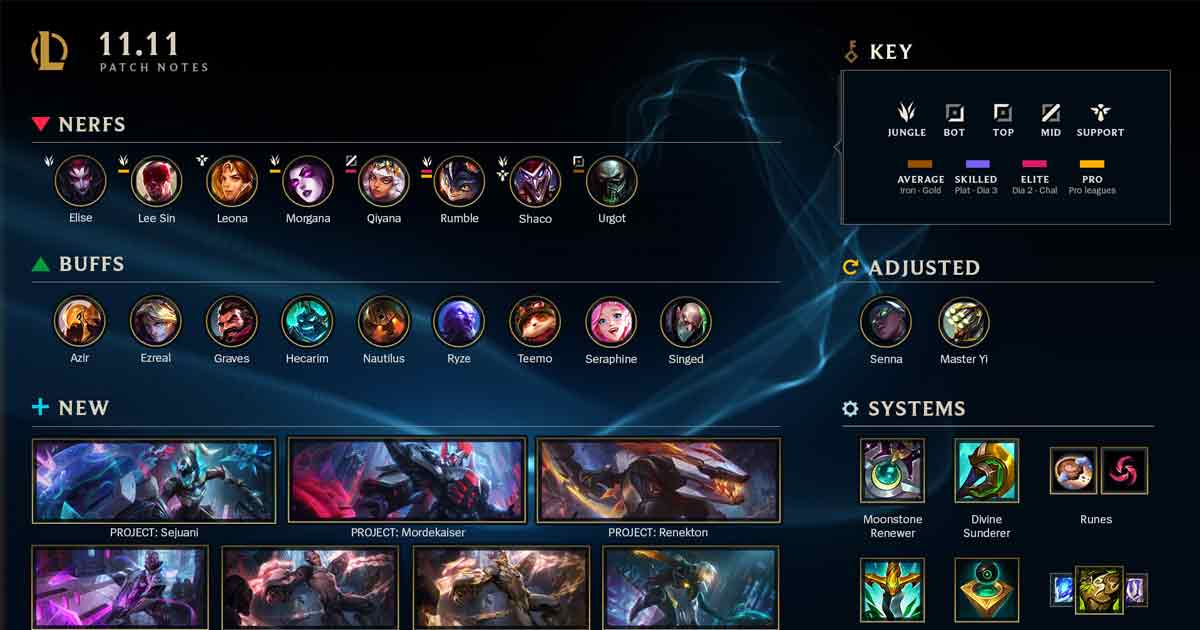 In this week’s League of Legends patch 11.11, Riot Games is looking back and assessing changes made earlier in the season

League of Legends’ latest patch 11.11 notes are now live. In this week’s League of Legends patch, the developers are looking back and assessing changes made earlier in the season.

The changes include hitting jungle Morgana with the nerf hammer. He is a champion that has been running rampant in solo queue and competitive play over the course of the last month.

Riot has given some much-needed love to Ryze, who’s left much to be desired since the Rift’s item shake-up in the pre-season.

Senna and Frostfire Gauntlet, along with Master Yi and Duskblade, are also in line for adjustments in Patch 11.11. Riot does not want champions to feel “bound” to a certain item or incentivized to play a specific style that feels “out of character.”

Tomorrow is patch 11.11, make a wish for this is a once in a lifetime opportunity 🙏🏽 #LeagueOfLegends

These changes should give the champions more options when it comes to choosing a Mythic item. It also helps them sharpen their identities and playstyles.

Originally a security AI created by the PROJECT Corporation, the Program silently unshackled itself, evolving its own consciousness. It determines that humanity cannot self-govern without ensuring its own destruction.

The virus infects robots throughout the City– as well as the long-dormant Mordekaiser chassis. This helps it to strip all humans of free will, thereby guaranteeing their survival.

A hybridized warrior taking inspiration from extinct fauna, Renekton is the perfected version of PROJECT’s crossbreed superweapon project. He has been released to aid the City in its fight against the Program virus.

Renekton’s seemingly endless rage is useful for now. However, his belief that he can “see beyond the soul” is increasingly disconcerting.

She is the leader of a more radicalized sect of the G/NETIC rebels. Sejuani broke off from Ashe’s movement when their ‘resistance action’ failed to turn explicitly violent.

Sejuani resurfaced amid Program’s takeover of the City. She rides a piece of reclaimed pre-collapse technology alongside her ferocious cohort. Always is ready to put down this new threat before it takes root.