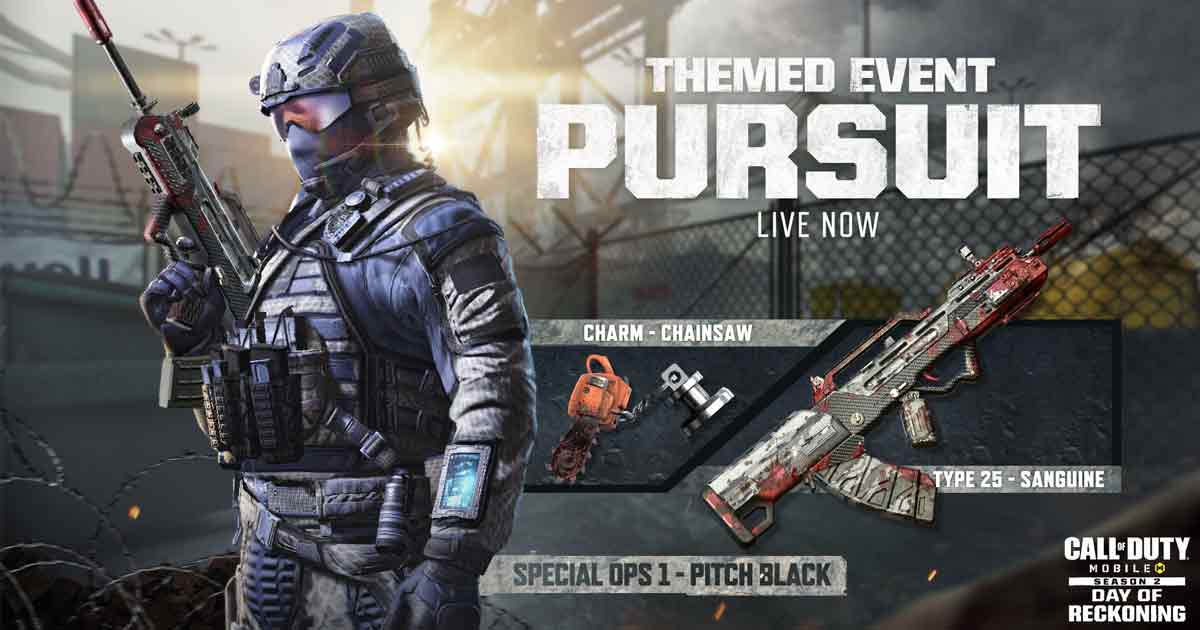 As Call of Duty fans prepare for the Season 2 update going live on March 26th, a new event ‘Pursuit’ will also be hitting the floors. In this event, players will get a chance to command their individual Special Ops soldier even as they battle it out against Cordis Die.

Pursuit in Call of Duty Mobile

This new event pushes players to train the best soldier they can and earn new rewards in due course. In Pursuit, each player is given command over their own Warrior class Special Ops soldier.

Players can dispatch his soldier out on operations and win a chance to acquire any event reward on display. These include the Epic Type 25 – Sanguine weapon Blueprint in this Call of Duty event.

By simply playing Multiplayer and Battle Royale matches in Pursuit, gamers get to earn XP to strengthen their warrior. As the soldier grows stronger, players’ improve their odds of returning with better items.

✊💥 Prepare yourselves to engage in the Pursuit!

🆕 New themed event will be available to play tomorrow at 5PM PDT in #CODMobile! pic.twitter.com/j7Jg1Liidt

Call of Duty gamers can enhance their chances of winning by using the Vagabond Weapon set. Playing matches with this weapon set equipped from the Urbanite Draw as it increases players’ Warrior XP earned by 50%.

Getting active: Players need to explore Season 2 offerings to the fullest to empower their soldier in Pursuit. All that’s required is to excel in Multiplayer and Battle Royale matches.

Minimize Downtime: Gamers must send out their fighter as often as possible for better opportunities to acquire the best items on offer. Once their cooldown period resets, players must strengthen them with whatever XP they have earned. After this, they need to send the warriors back out to grab the next item.

Training Soldiers better: Preparing and training for the next assignment takes time. As a soldier rests between operations, gamers need to actively engage in Multiplayer and Battle Royale matches. This will help them to acquire Warrior XP that can be used to strengthen their ally in the next run.

Sustaining optimum levels: Gamers must raise their soldier to their peak in order to unlock the Special Ops 1 – Pitch Black operator. they can henceforth use this in Multiplayer and Battle Royale as testimony to their service.

Seasonal Challenges galore: Finally, it is important to check out the latest challenges to see what else can work on while earning XP for the soldier. Players can test their skills with assault rifles in the seven-part Rifle Steamroller challenge.

When they have successfully completed all the tasks , gamers get to unlock the Epic KN-44 – Golden Talon Blueprint. They also stand a chance to get a massive Battle Pass XP payout by completing the five-part Pyrotechnics challenge.