Call of Duty: Mobile to get Napalm Scorestreak in Season 2 Update 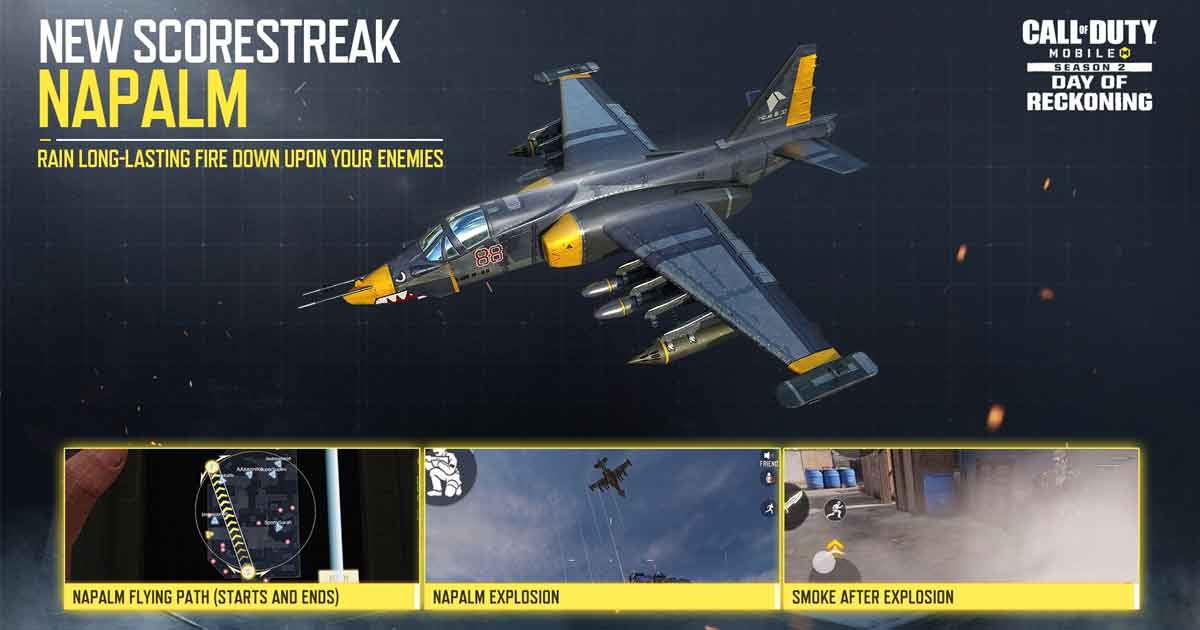 Season 2 of Call of Duty Mobile will get a new Napalm scorestreak, which can be unlocked via the Battle Pass or in the Seasonal Challenge

Activision has shared additional information about the upcoming Season 2 of Call of Duty (CoD): Mobile. While gamers are aware that the new Season will be ‘Day of Reckoning’, a new scorestreak called Napalm will also be introduced.

The Napalm scorestreak will allow players to call in a plane, which will rain down fire from the sky. When activating the scorestreak, players will have to choose the flight patch of the aircraft.

The plane will then fly across the map, while dropping napalm bombs along the way. The fire from the napalm will also create smoke, thereby obscuring the enemy’s vision.

✈ Call for air support!
💥 Deploy the new Scorestreak, Napalm to clear enemies in your path!

🔜 Coming to #CODMobile next week as a part of the Season 2 Battle Pass! pic.twitter.com/UiemxRGc4u

Players will most likely be able to unlock the new Napalm scorestreak when they reach a certain Tier in the Season 2 free Battle Pass. If not, it should be available via a Seasonal Challenge Feature.

You May Also Like :  Riot Games to take action against Win Trading in Wild Rift

CoD developers have not yet revealed the points players will have to accumulate in order to call in the scorestreak. Apparently, players will be able to shoot down the plane as it makes its way over the map.

Besides a new scorestream, players will also be able to earn two new weapons. This includes the AS VAL assault rifle and the SPR 208 sniper rifle.

The former weapon would be available from the start via the free Battle Pass. Players will be able to access to the latter weapon through his/her performance in a Seasonal Challenge.

The Season 2 update will be bringing in two new maps with multiple added features. This includes the Shoot House map from 2019’s Call of Duty: Modern Warfare.

The other is a new version of Shipment. This update will bring the Shipment 1944 map with a more modern aesthetic. The new Season 2 update should be available to gamers very soon.